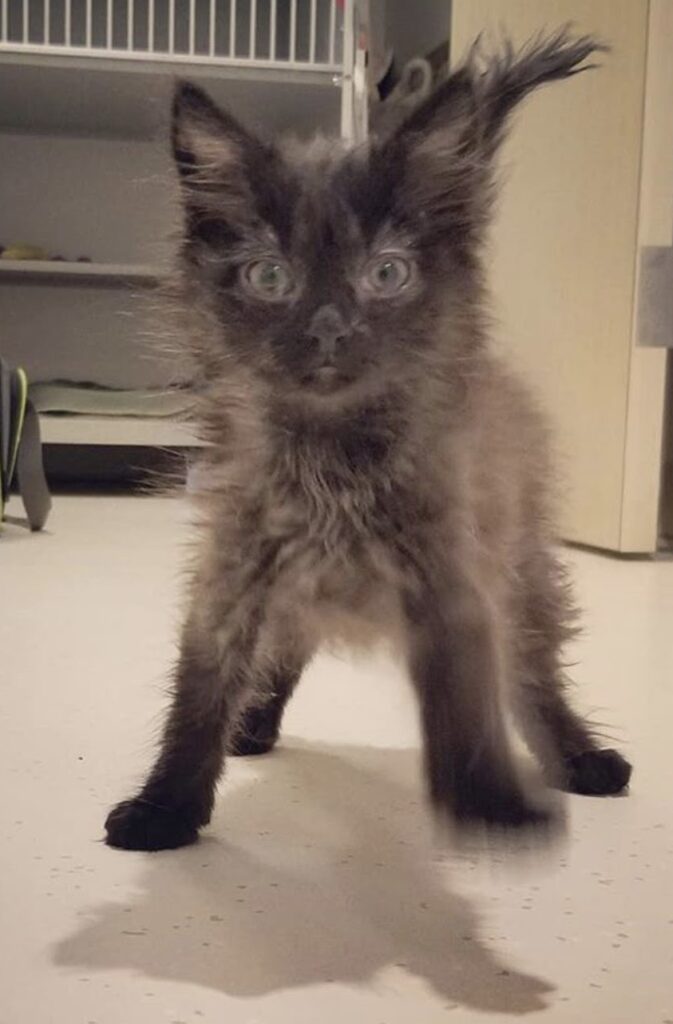 Twitch came to us as a shelter transfer from PG County. While his sibling is normal, Twitch is rather unique. It is not known if his minor motor dysfunctions are from head trauma or what is called Cerebellar Hypoplasia (CH), which is a neurological disorder where the cerebellum portion of the brain does not fully develop (think smaller). CH cats have a distinct wobble to their walk, which is why these cats are lovingly called in the rescue world “wobbly cats.” They may have difficulty with balance, walking, as well as the ability to hold their head still while eating, giving the effect of them “pecking” at their food. One trait everyone can agree on about a CH cat is that it does not stop them from being loving, playful, brilliant companions.

CH tends to be caused by being exposed to the panleukopenia virus while the mother cat is pregnant, or it can be from the use of a modified live (attenuated) vaccination given earlier than the recommended age (earlier than 4 weeks of age.) While these pathogens cannot cause clinical disease, they can still multiply within the cat and cause serious side effects during important periods of growth.

With a bit of extra TLC, CH did not stop Twitch from developing into a beautiful fuzzy boy with a delightful personality! He heads to the Hudson Valley, NY in March to go live with his new family who are well seasoned with living with CH cats. 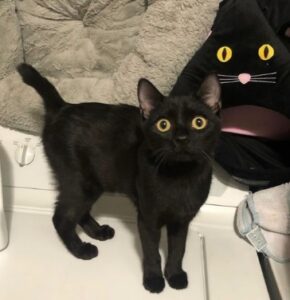 Bailey is no stranger to us. He originally came to us for management of a rectal stricture due to a mild form of Manx Tail Syndrome (lumbar and pelvic bone and soft tissue deformities) and poor intestinal motility, and then never returned for further care. Weeks later Ellen received a phone call from a surgical facility asking us to take a cat in that looked just like Bailey and it turned out, it was Bailey! He apparently was adopted out when he was not 100% better and was returned for still having issues going to the bathroom. He joined our program officially as a member of Team Scratch N’ Dent and is currently in foster being managed very well on a stool softener. Our goal is for him NOT to have rectal surgery, as it can actually cause the cat to become incontinent, but instead stretch his stricture so he can have a bowel movement with ease.

The Incredible Pettable “Eggbert”: NOT AVAILABLE FOR ADOPTION 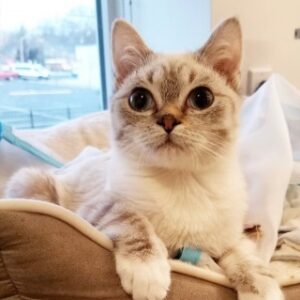 Eggbert is one of our cases from 2019. He came to us from another rescue after they were told he had hydrocephalus. Turns out he is a brachycephalic cat (smushed-faced.) While he did live a normal life for several weeks, in October 2019 he began to develop strange symptoms of ataxia (inability to keep himself upright) in the hind end and over 3 days became fully paralyzed. Unfortunately we did not get the answers we hoped for with a neurological consult and an MRI that broke during his scan that did not give any results. That did not stop us from fighting for him. The team at NOVA CAT CLINIC initiated a protocol for meningitis and toxoplasmosis as that is what his symptoms resembled and we had no other options at that time. Not only did he get around the clock care, he started using an Assisi Loop Lounge https://assisianimalhealth.com/ , and now gets weekly acupuncture with https://www.acuvetforpets.com/. He also sees a rehab team at https://hopecentervet.com/services/rehabilitation/ for movement and water treadmill therapy.
After several weeks of care, we knew Egg would not walk again like he used to and we decided we had to do more. Thanks to everyone who donated, we are able to work with https://www.adaptivetechandconsulting.com/ and are in the process of creating the perfect cart for him. The first two models did not go very well, but we have confidence the third time's a charm and maybe this will be what Eggbert will use to walk and give him some more freedom of movement. While we have our bright, loving boy back, we want to make sure he can have the ability to play like his other feline friends. You can watch Eggbert and all of the other kittens of the CGMFF (Team Scratch N’ Dent) on Ellen’s Instagram Profile https://www.instagram.com/thecatlvt/, and on CGMFF’s Facebook page https://www.facebook.com/CMGMFF

Thanks to all of your generous donations, we are able to continue to care for cats that otherwise would simply be euthanized.  Every animal deserves a chance at life and while we can only make a difference for a few, our outreach has helped hundreds more.